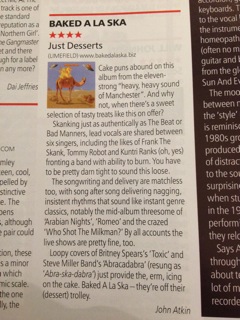 “Cake puns abound on this album from the eleven strain “heavy, heavy sound of Manchester”. And why not, when there’s a sweet selection of tasty treats like this on offer?

Skanking just as authentically as The Beat or Bad Manners, lead vocals are shared between six singers, including the likes of Frank the Skank, Tommy Robot and Kuntri Ranks (oh, yes) fronting a band with ability to burn. You have to be pretty damn tight to sound this loose.